Smiljan, a small village in the mountainous Lika in Croatia, is a home to the most famous and respected inventor, engineer and scientist in the world – Nikola Tesla.

Nikola Tesla, a person who brought so much to the word and the way of life we live today. Tesla coil, the magnifying transmitter, turbine and induction motor are just some of his inventions.

Tesla was a futurist who knew what the future brings, so he envisioned a system that’ll collect information and broadcast it to a hand-held device. And was he right – nowadays, all of us have a mobile phone with an internet connection in our hands. He also envisioned the technology for radio astronomy as well as X-rays.

His home town, Smiljan, is located in the central part of Velebit mountain and not far from the Adriatic Sea. It’s a perfect place to visit if you want to enjoy the green fields and hills as well as go for a swim in the sea.

Smiljan is a small place that consists of eighteen hamlets amd has less than 500 inhabitants. But it’s still worth a visit, especially if you’re going to Dalmatia as it’s on your way.

What to see in Smiljan

This Memorial Center is a cultural-historical site and museum dedicated to Nikola Tesla. The memorial complex contains many different components such as a museum in his birth house, ortodox church of St. Peter and Paul, village cemetery, Tesla’s testing station, metal statue of Nikola Tesla, various monuments and much more. The scientist in you will enjoy seeing the prototypes of some Tesla’s inventions such as induction motor, turbine, rotating magnetic fiels and Tesla coil.

From time to time, the Memorial Center organizes scientific and educational activities which are always interesting to visit.

This complex was open due to celebration of the 150th anniversary of Nikola Tesla’s birth in 2006 but it was originally built in 1956.

Along with all the monuments dedicated to Nikola Tesla, there are also many natural beauties near Smiljan. One of them is a cave park Grabovača that features eight caves and a pit. You can visit the caves in all the seasons except winter. If you love being active on your vacation, Grabovača is a great place for recreational activities. You can enter the cave Samograd accompanied with the Park’s guide and explore the hidden beauties of this mysterious cave. There are also organised tours to Lika river where you can enjoy free lunch and swimming.

When in Lika, you don’t want to miss Velebit nature park. Velebit is the largest protected area of Croatia and inside of this nature park, there are two national parks – Paklenica and Northern Velebit that are definitely worth a visit. You’ll love the richness of plant and animal life in the Velebit nature park as well as its unique relief and diversity. 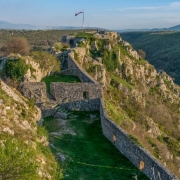 Things to Do in Knin, a Town with Rich Historical Value 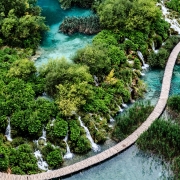 Visit Plitvice Lakes, The Most Popular National Park in Croatia

Things to Do in Rovinj & Must-See Attractions Scroll to top